hello. it me again. and it is for you if you you are here 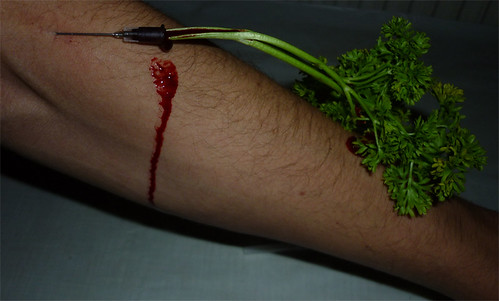 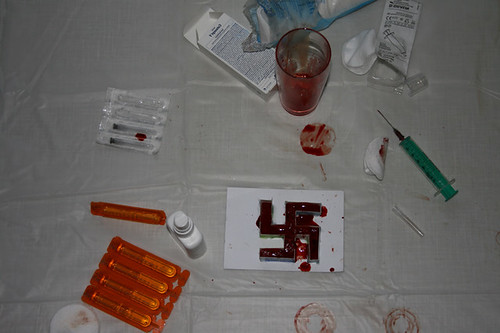 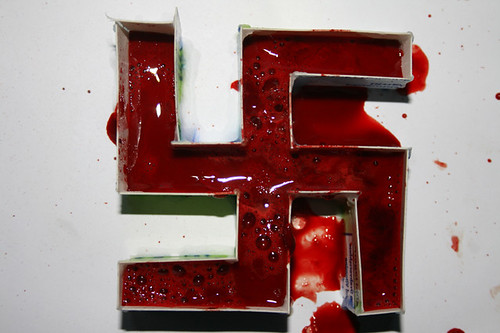 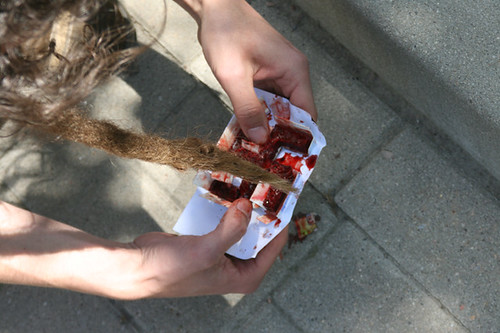 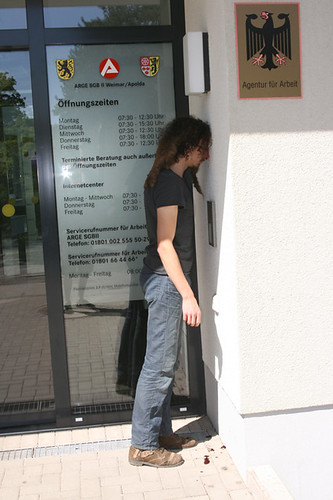 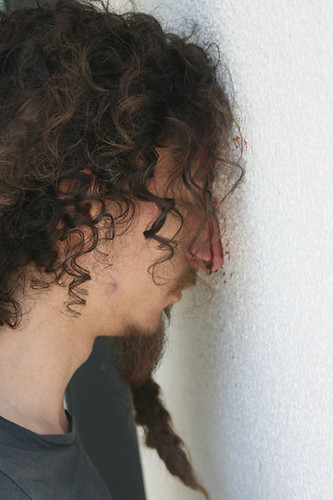 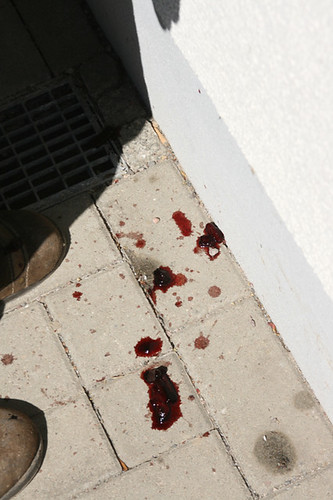 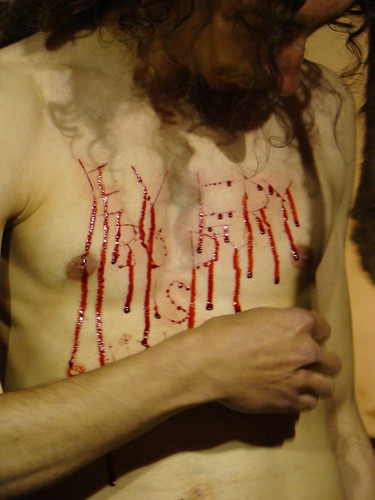 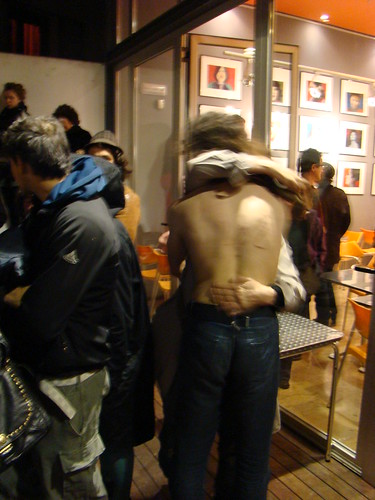 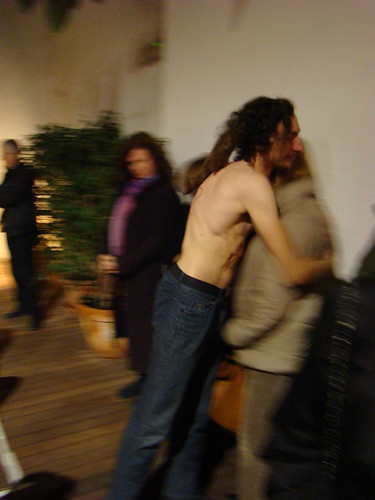 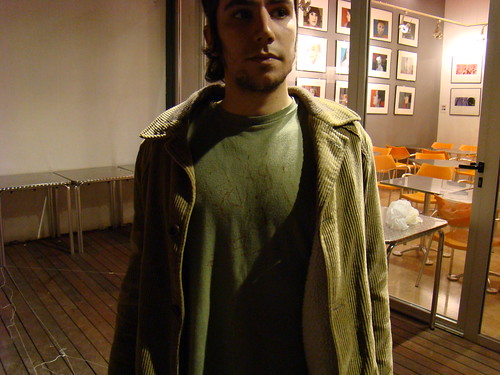 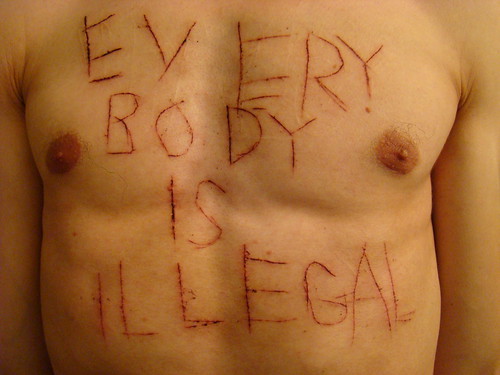 during performance event at institute of france, valencia 5.3.2011 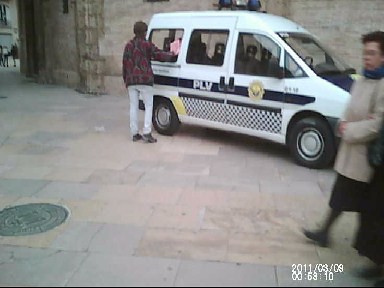 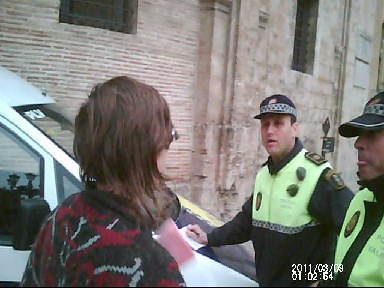 1. Actions aimed at the incitement of national, racial, or religious enmity, abasement of human dignity, and also propaganda of the exceptionality, superiority, or inferiority of individuals by reason of their attitude to religion, national, or racial affiliation, if these acts have been committed in public or with the use of mass media,
shall be punishable by a fine in the amount of 500 to 800 minimum wages, or in the amount of the wage or salary, or any other income of the convicted person for a period of five to eight months, or by restraint of liberty for a term of up to three years, or by deprivation of liberty for a term of two to four years.
2. The same acts committed:
a) with the use of violence or with the threat of its use;
b) by a person through his official position;
c) by an organized group,
shall be punishable by deprivation of liberty for a term of three to five years.

Russian artist Oleg Mavromatti creating "Constitution." The work was a six-month project during which he copied the entire text of the Russian Constitution with his own blood. ``Freedom of speech" is guaranteed by the constitution,'' he said. Source: Exit Art/Oleg Mavromatti via Bloomberg

“Russian prison means death for people like me,” said Oleg Mavromatti, a filmmaker and performance artist.

Mavromatti, 45, fled to Bulgaria in 2000 after the Russian Orthodox Church complained about a movie he was shooting in which he is crucified. He was accused of violating a criminal code that includes inciting religious hatred and denigrating the church, an offense punishable by as much as five years in prison.

“They gave me two options,” he said in a telephone interview from his apartment in Sofia. “Either I voluntarily fly to Moscow and stand trial or Interpol comes after me.”

Mavromatti’s case highlights what human-rights activists see as a return to Soviet-style censorship, with a resurgent Russian Orthodox Church playing a central role and the Kremlin supporting it.

Last month, four artworks by Avdei Ter-Oganian were temporarily withheld by Russian authorities from an exhibition at the Louvre Museum in Paris because, a Culture Ministry official said, they incited religious hatred. This summer, two prominent art curators were found guilty of the same crime because several works in the “Forbidden Art” exhibition they organized in 2007 were considered offensive, including a depiction of a Christ figure with a Mickey Mouse head.

“Some people may find a particular work of art offensive or disagreeable, however this cannot be the basis for restricting the right to freedom of expression,” said Denis Krivosheev, a researcher on Russia at Amnesty International in London.

Mavromatti has spent the past decade in Sofia and New York where he regularly showed at Exit Art, a nonprofit exhibition space. In his performance-art pieces, his subjects have included the financial crisis and the war in Iraq.

After Russian authorities released Ter-Oganian’s work, the Prague-based artist announced he wouldn’t participate in the Louvre show unless Mavromatti’s passport is renewed.

In New York, Mavromatti’s backers include U.S. Senator Kirsten Gillibrand, Exit Art director Jeanette Ingberman, art dealer Ronald Feldman and Mark Rothko’s son Christopher Rothko. All of them have written letters to immigration officials in Bulgaria and to the United Nations High Commissioner for Refugees in support of Mavromatti’s application for the humanitarian-refugee status he would need to enter another country.

After learning on Sept. 11 that Mavromatti’s passport wasn’t renewed, Ingberman called Feldman, who had campaigned on behalf of Soviet dissidents in the 1970s and 1980s.

“It’s a dangerous sign that democracy in Russia is struggling,” Feldman said. He and Ingberman buttonholed Gillibrand at a reception and told the senator about Mavromatti’s plight.

“Time is running out,” said Feldman. “We want to forestall his deportation. We don’t want to fight this battle in Russia.”

To contact the reporter of this story: Katya Kazakina in New York at kkazakina@bloomberg.net.

To contact the editor responsible for this story: Manuela Hoelterhoff at mhoelterhoff@bloomberg.net.